Large brown algae commonly known as ‘kelp’ provide habitat to a variety of species in Puget Sound. Declines in the amount of bull kelp have been observed in many areas. The Northwest Straits Commission works to monitor and protect kelp in northern Puget Sound.

The large brown algae commonly known as ‘kelp’ provide habitat to a variety of species in Puget Sound, and are considered critical habitat warranting protection. Kelp, like eelgrass, provides food, shade, and other valuable ecosystem services.

Conspicuous declines in the abundance of bull kelp (Nereocystis luetkeana), the most common canopy-forming species in Puget Sound, have been observed in many areas. The cause is likely a number of factors, including stormwater impacts, sedimentation, and competitive interactions. Little information on abundance, or changes over time, is available in the Northwest Straits region. And much remains unknown about the understory kelp species.

The Commission launched a regional survey of bull kelp (Nereocystis) beds using a kayak-based survey protocol developed in 2014. Six MRCs recruited volunteers and piloted this project, and the Commission compiled the data and created a regional kelp database. A volunteer pilot photographed project sites in four counties, providing baseline aerial data on the extent of kelp. Click here to watch a short video on the kayak-based survey project. 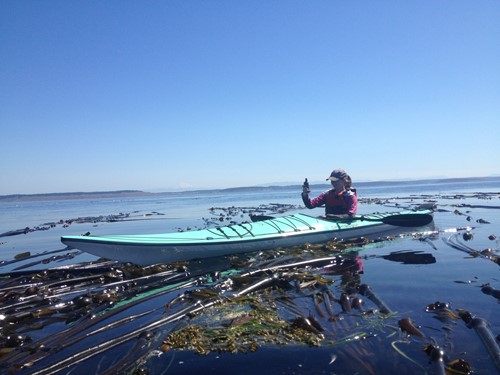 In December 2015, the Commission convened a workshop to identify changes needed to finalize the protocol for future surveys. The protocol was also added to the PSEMP Nearshore Monitoring Toolbox. As the dataset becomes more robust, it will serve to improve our understanding of kelp abundance in the Northwest Straits region.

Our science advisory committee and partners from natural resource agencies are instrumental in the success of this project.